A Legacy of Innovation 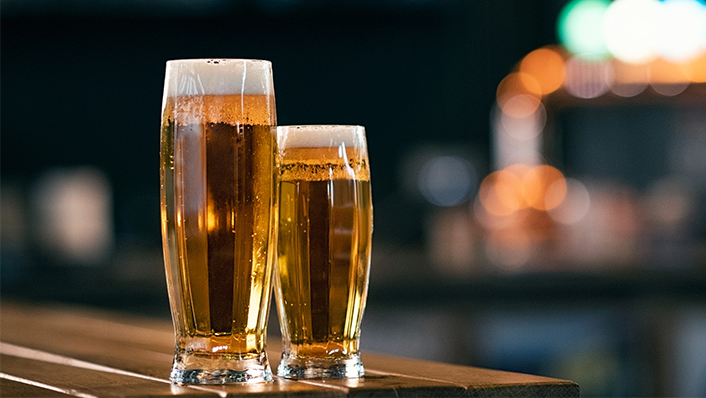 What is stabilization, anyway?

Beers that are not well stabilized will become hazy when chilled. The haze is a result of certain proteins from cereal grains aggregating with certain polyphenols from hops and clump into tiny particles over time. That clouds the beverage, which may shorten shelf life and be less appealing to consumers.

Back in the 1960s, preventing clouding—or chill haze—was a tricky task for chemists. They had to remove the chill haze–sensitive proteins, without altering other proteins that are important for foaming and mouthfeel. Eichhorn and Raible discovered that silica gel could selectively adsorb, or collect on its surface, the proteins responsible for chill haze. It didn’t affect other proteins—foam-enhancing proteins, for instance—which stayed in solution, a feature that has been largely proved over decades of tests and industrial practice.

Since then, Grace’s solutions for breweries have evolved, adding additional value for the breweries.

Silica solutions for every step

As brewmasters know, solids and sediments have to be removed at a few points in the beer-making process; Grace has silica solutions ready for every step.

Brewing starts when a decoction from mashed malted barley is mixed with hops and boiled. At this stage, proteins known as hot break denature and coagulate. GRACE® colloidal silicas can help remove these proteins, along with hop fragments, during whirlpooling, significantly reducing the extract losses in the brewhouse.

With the solids removed, the wort—unfermented beer—is ready to mix with yeast and ferment. Afterward, during maturation, spent yeast and protein start aggregating and settling down; again, certain GRACE® silica products can help them settle faster, thereby reducing the solids load on the centrifuge or on the beer filter. The last step before filtration is stabilization. Grace recommends using DARACLAR® silica here, if not used already in maturation.

DARACLAR® 9000HP silica is a premiere silica gel for brewing. Made of highly pure, micronized silica particles crisscrossed with a network of pores, this silica was developed specifically for addition at the beer filter and is best in class at adsorbing haze-sensitive proteins.

DARACLAR® 9000HP silica filters fast because of its outstanding permeability, which also helps extend filtration cycles. In one case study, Grace’s support staff worked with a brewery to test the silica as a drop-in replacement for its prior stabilization agent. The customer saw a 10% increase in production capacity, without interrupting operations or investing in new equipment.

Since its launch in 2016, DARACLAR® 9000 HP silica has helped brewers around the world save up to 15% of brewing-quality water (DAW) used in filtration and stabilization, which helps the entire industry reduce its global footprint.

Grace has been helping solve brewmasters’ problems for 50 years. We look forward to helping you for 50 more.