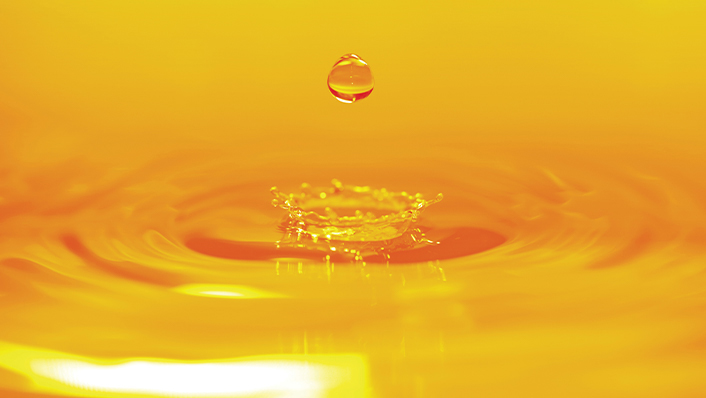 Biofuels, a class of transportation fuels derived from biomass conversion, are an attractive alternative to fossil fuels—both because they are compatible with legacy engine designs and because they represent a valid alternative to drive reductions in carbon emissions. Biodiesel is one such fuel.

Biodiesel is produced by the transesterification of oils and fats. Due to their animal and vegetable origins, the feedstock oils used for this process are often contaminated with phospholipids, trace metals, and soaps—that is, salts of long-chain fatty acids. The manufacturing process includes several aqueous washing steps to extract these polar contaminants. These steps may lead to problems of their own, however. If the water is not rigorously removed before the transesterification reaction, it can lead to the formation of an emulsion phase. Process engineers must also consider that washing large volumes of feedstock oil generates correspondingly large volumes of contaminated wastewater and associated feedstock losses.

To deal with these problems, adsorbent clays or silica products are used to remove contaminants from biodiesel’s feedstock. A leader in this class is W. R. Grace & Co.’s TRISYL® porous silica, a porous silica product that on a microscopic level resembles a sponge. The expansive internal surface area of TRISYL® silica particles captures polar contaminants, which can then be removed from the feedstock oil by filtration. One advantage of using silica rather than clay adsorbent is the smaller amount of silica needed for the removal of polar impurities. Refined feedstock oil can be treated with as little as 0.05–0.15% of TRISYL® silica. This means that the silica-pretreated feedstock process will generate 60–90% less solid waste than a comparable clay adsorbent process. At the same time, that helps reduce the amount of washing water.

Although the adsorbents are intended to remove polar contaminants, they can also retain some volume of feedstock oil. That leads to yield loss as some oil leaves the process stream with the polar contaminants. Due to its high functional water content, TRISYL® silica helps reduce by one-third, based on weight, the amount of entrapped oil that is lost compared with other adsorbents. These savings represent another point of favor for TRISYL® silica, as the oil saved can become a valuable product.

Governments, whose goals include reducing greenhouse gas emissions and achieving energy independence, have begun to mandate the adoption of biodiesels. In order for the technology to become more widespread, scientists must continue to search for ways to make biodiesel manufacturing more efficient and sustainable from both an environmental and economic perspective. TRISYL® silica helps the biodiesel industry achieve higher process efficiency and sustainability by increasing process yield and reducing environmental footprint. The cleaner feedstock oils they produce pay dividends down the line.

Read more about our Biodiesel